Iron deficiency anaemia is the most typical type of anaemia. It happens when the body does not have enough healthy red blood cells and the blood can’t supply proper oxygen to the body. Iron is generelly used as anemia home remedies because it is said to be a Blood Builder. Indeed it contributes to normal formation of red blood cells and haemoglobin and to normal oxygen transport. It also contributes to the reduction of tiredness and fatigue and to normal function of the immune system. It is why . EC Regulation 1924/2006 EU Health Claims, Iron Tablets

Vitamin C increases iron absorption, contributes to the reduction of tiredness and fatigue, and to the normal function of the immune system. It is often used as anemia home remedies. You can increase your vitamin C levels by eating an overall healthy diet, but also by taking it as food supplement. EC Regulation 1924/2006 EU Health Claims, Vitamin C.

Beetroot is one of the most effective home remedy for anemia treatment. Indeed, we all know about high iron in beetroot and why people take it to have a healthy circulatory system and healthy iron levels: the nutrient richness of beetroot is said to stimulate the production of red blood cells in the body and thus to improve the haemoglobin level.

Eating sesame seeds is another great way to help increase your iron intake, as sesame seeds, especially black ones, are known to be good sources of iron. Many people have a very good feeling about sesame seeds and add them to many meals. It is also a good idea to soak them in water for a few hours, grind them into a paste, and then eat them daily with a teaspoon of honey.

Taking Moringa, also called the Tree of Life, can help you get the iron you need to manage anemia. Regular addition of moringa leaves is well known to improve haemoglobin levels and red blood cell counts. Natural healers in Peru, India and many other countries used it since ancient times to treat issues like anemia and to boost immunity. It’s a common herb for anemia home remedies.

Dates and raisins are other amazing anemia home remedies. Consumption of these dry fruits is known to bolster the immune system and promote iron absorption as they offer a excellent combination of iron and Vitamin C. 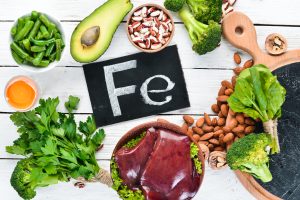 Anemia refers to a decrease in blood oxygen delivery to cells. It is an abnormal decrease in the hemoglobin level in the blood. The threshold value below which we speak of anemia varies according to age and sex. There are many causes of anemia, but iron deficiency is the most common. There are also many types of anemia, but anemia is always characterized by severe fatigue, lack of energy, and shortness of breath. Also dizziness and irregular heart beat, headaches, dizziness, nausea, vomiting, poor concentration, low appetite, or lack of appetite.[1]

It is possible to reduce the risk of anaemia by changing your diet and increasing the availability of iron. Anti-anemia foods include foods high in iron, vitamin B9, and vitamin B12.[2]

Anaemia is a risk for some people. For example, anaemia is more common in women with heavy periods, women who are pregnant or nursing, and those who are genetically predisposed.[3] Anaemia can also be caused by certain pathologies: cancers, hepatitis and HIV, as well as gastrointestinal disorders. Try to always use herbal medicina for anemia treatment, there are many anemia home remedies.

What is the fastest way to cure anemia?

It is important to know how to prevent anemia, but also how to cure it. Ther are many anemia treatment foods, but in summary always take care to:
Nuclear Attack Home Remedies?

What are the 3 main causes of anemia?

Anemia isn't a real disease. It is a result of other diseases and problems that affect the production, conservation, or "quality" red blood cells. It is important to know what causes anemia. For example:  If you have some doubts about your blood cell production, it's always good to do an anemia test (like an iron deficiency anemia evaluation) and start an anemia treatment. Anemia does affect anyone, not only kids and woman; but also men and postmenopausal women.

If you ask 'can anemia be cured', the answer is yes: it is curable. Anemia treatment depends on the amount of haemoglobin present in the blood as well as the symptoms.Anaemia should be treated quickly if the haemoglobin levels fall below 8 g/100ml.[4] It can lead to...Read more: Is anemia curable?

How serious is being anemic?

According to your immunity and the type of anemia (the most common is the iron deficiency anaemia), you will feel light or severe anemia symptoms. There are many symptoms of anemia!Anemia is not uncommon, but it can sometimes lead to serious complications if not treated in time. The first step is to do a diagnosis of iron deficiency anemia, which is the most common typo of anemia and then start a natural anemia treatment.

This book provides an up- to- date summary of many advances in our understanding of anemia, including its causes and pathogenesis, methods of diagnosis, and the morbidity and mortality associated with it. Special attention is paid to the anemia of chronic disease. Nutritional causes of anemia, especially in developing countries, are discussed. Also presented are anemias related to pregnancy, the fetus and the newborn infant. Two common infections that cause anemia in developing countries,...

This book has been updated for 2014. If you have discovered that you have Iron Deficiency Anemia, then this is a must read for you. This information will help you cure your deficient iron blood and get your health back to normal. When you need iron, it is best to do it the natural way. This book tells you exactly how to do this. If you are under a doctor's care, this information is even more important. Your doctor will not give you this information, since he or she is not a nutritionist. You...

If you have discovered that you have Iron Deficiency Anemia, then this is a must read for you. This information will help you cure your deficient iron blood and get your health back to normal. When you need iron, it is best to do it the natural way. This book tells you exactly how to do this. If you are under a ...